Posted at 10:56h in Blog, Uncategorised by David Sharp 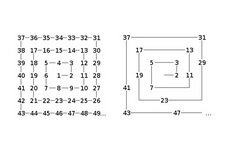 A very interesting read regarding patterns and prime numbers.  We thought it was worth sharing.

Because prime numbers are indivisible (except by 1 and themselves), and because all other numbers can be written as multiples of them, they are often regarded as the “atoms” of the maths world. Despite their importance, the distribution of prime numbers among the integers is still a mystery. There is no pattern dictating which numbers will be prime or how far apart successive primes will be.

The seeming randomness of the primes makes the pattern found in “Ulam spirals” very strange indeed.

In 1963, the mathematician Stanislaw Ulam noticed an odd pattern while doodling in his notebook during a presentation: When integers are written in a spiral, prime numbers always seem to fall along diagonal lines. This in itself wasn’t so surprising, because all prime numbers except for the number 2 are odd, and diagonal lines in integer spirals are alternately odd and even. Much more startling was the tendency of prime numbers to lie on some diagonals more than others — and this happens regardless of whether you start with 1 in the middle, or any other number.